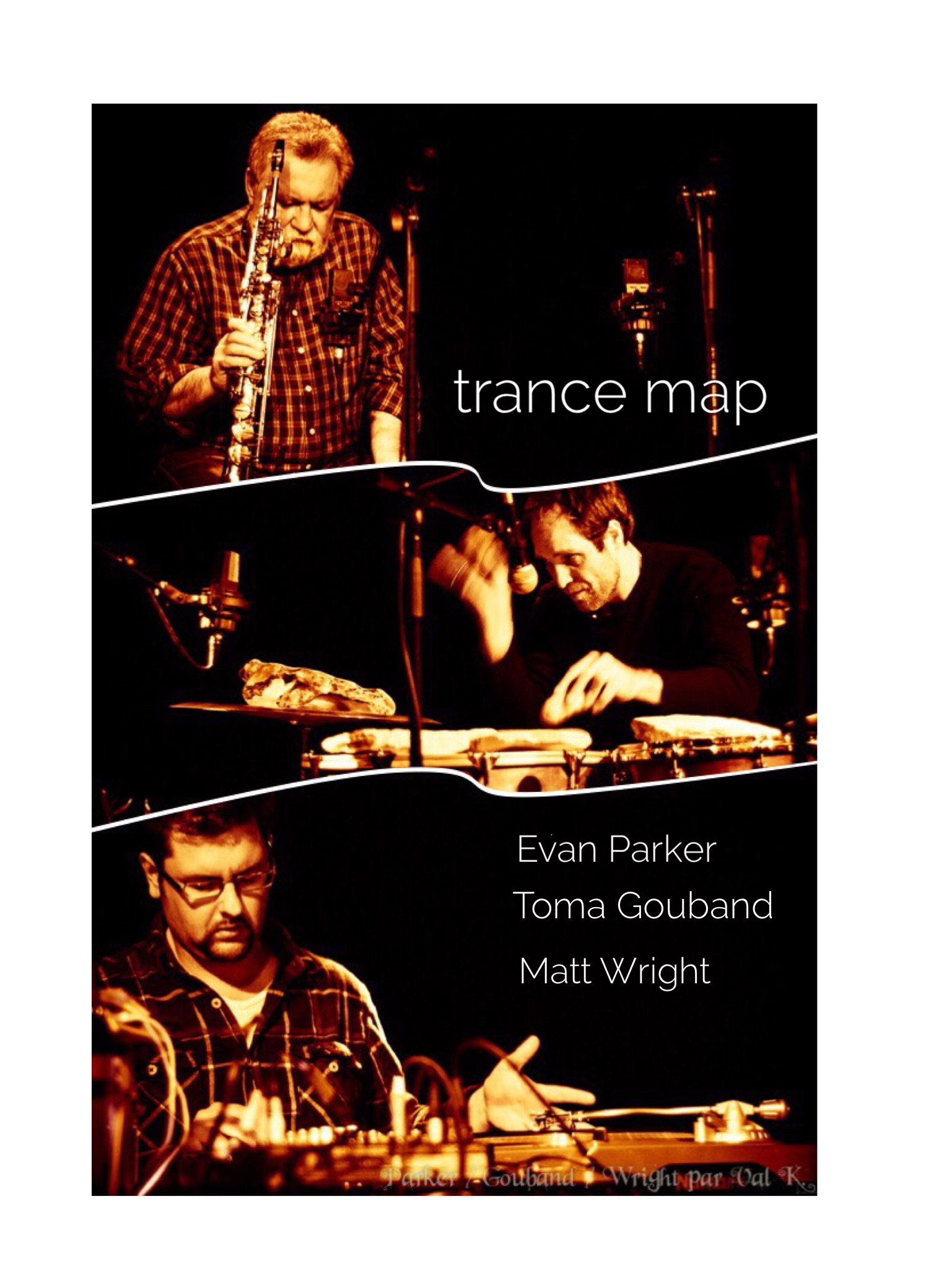 Trance Map is originally Matt and Evan ‘s collaboration, in a game of reflections with electronic and acoustic, an exploration of a territory out of time. Concerts are usually quite long, in order to take time to loose time and discover.

Evan Parker, Matthew Wright & Toma Gouband : Trance Map
SLIDESHOW Trance Map is part of an ongoing body of work on Psi that includes past releases by Joel Ryan and DJ Sniff, which each used Evan Parker’s music as source material to be manipulated to create new works. Whereas Parker was not an active participant in those recordings, for this album he has worked collaboratively with Matthew Wright to create Trance Map, to the extent that each is credited with “co-composition.”

Wright is a senior lecturer at Canterbury Christ Church University, where he teaches modules related to composition and sonic art; he also runs the university’s ensemble Contact and is artistic director of the new music group Splinter Cell. The recording of Trance Map took place at the university in 2008 and 2009. In addition to playing soprano saxophone, Parker played samples from his collection on LP, cassette or CD, while Wright uses turntables, computer and software. As Parker says of Wright, “His facility with the various DSP [digital signal processing] programs used totally blurs the distinction between playing, mixing and editing.”

Despite being indexed as four separate tracks, this is one continuous piece of music that lasts over 68 minutes. The introductory section consists of small sounds that could be samples of insect noises or their electronically-generated equivalent. Slowly, an electronic drone increases in intensity from nothing, gradually revealing previously unheard textures and details, including the unmistakable sound of Parker’s sax. The main body of the piece persists for over an hour; initially, it is intermittently punctuated by a pulsing low frequency throb that adds an air of menace to the soundscape. Other than this, its characteristic sounds are Parker’s soprano saxophone, surrounded by all manner of bird and insect sounds, real and electronic. The overall effect is of Parker playing in a swarming tropical jungle clearing.

Trance Map is well-named. When Anthony Braxton named one phase of his compositions “Ghost Trance Music,” the justifiable question was, “Where is the trance?” No such indignant query is necessary with this music. As Parker points out in his sleeve notes, it is multipurpose, depending on the volume at which it is played back. At normal volume it is over-brimming with aural information, much of it operating at a subliminal level. As such, it richly repays repeated listening and intense concentration being invested in it. At a much lower volume—perhaps late at night, on headphones—it is music designed to fall asleep to. Or even to induce a trance-like state. Either way, it is mesmerizingly beautiful.